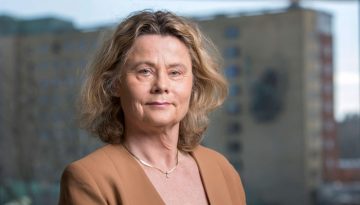 CHRONICLE. In early June, the Riksdag will vote on the Spring Budget Bill. But its content does not benefit medical research in Sweden. As Dean Agneta Holmäng writes in her column, the University’s medical faculties and Karolinska Institute are unanimous in this criticism.

On Monday, April 19, Sahlgrenska Academy hosted a national Deans’ Meeting that, owing to the pandemic, had to take place on Zoom. All the medical faculties’ deans were present. Other invitees included university vice-chancellors with a medical background; Karolinska Institute’s President Ole Petter Ottersen; and the Vice-Chancellors of Lund University, Erik Renström, and Linköping University, Jan-Ingvar Jönsson. Although the meeting was virtual, the discussions were highly rewarding and constructive.

Medical research and education during the pandemic

The meeting focused on the changes underway in research funding, and how they will affect medical research. We all agreed that the past year’s pandemic had been a strain on all Sweden’s higher education institutions (HEIs), drastically changing conditions and scope for research as well as education. The HEIs in Sweden with medical faculties — Gothenburg, Linköping, Lund, Karolinska Institute (KI), Umeå, Uppsala and Örebro — have been under particular duress for several reasons. Pressure on medical research and on the scientists themselves has been very heavy. Many clinical researchers have been needed in health care, and clinical research has been held back because patients could not be included in studies, while society has been in great need of knowledge and facts related to the pandemic.

Given the above, the priorities in the Government’s Spring Budget Amendment Bill are objectionable. In the throes of the greatest health crisis in modern times, all seven Swedish universities with a faculty of medicine are to be allocated a significantly smaller share, in proportional terms, of the extra funds granted for research and doctoral education. During the meeting, all of us medical deans and KI’s President therefore agreed to endorse a debate article in which we problematize the proposals and highlight their implications for medical research and education. We hope our contribution to the debate can influence the Riksdag ahead of its decision on the Spring Budget Bill in early June.

The biggest news in the Spring Budget Bill is the initiative concerning profile areas. These areas are part of a new quality-based system of distributing research grants. Discussions are now underway in the Swedish Association of Swedish Higher Education Institutions (SUHF) and elsewhere on what these new profile areas may conceivably entail. The research councils have been commissioned to carry out a “lightning survey” of ways to implement the areas.

A call for proposals, under the aegis of the Swedish Research Council (VR), is planned to take place in September, when the HEIs will be able to apply for profile areas. According to Swedish Minister of Higher Education and Research Matilda Ernkrans, the Government’s ambition is that, in the long term, every one of the 27 HEIs in Sweden should be able to have one or possibly two profile areas of their own. The Government is initially investing half a billion kronor, to be shared among the HEIs.

Increased control of research in reality

The forced nature of the plan is causing apprehension, since it is currently unclear how assessment will be done when the profile areas are distributed. Obviously, develop profile areas in a short time will be problematic, especially for the broad universities where there is a risk of internal friction as a result. There is also a manifest risk that the profile-area initiative will, in reality, involve regional-policy governance of research. Free research, governed by excellence, has invariably yielded the best results and led to medical breakthroughs. A substantial increase in basic funding is therefore a much better way of investing taxpayers’ money than initiatives aimed at specific areas.

In the past year, to stop the spread of infection and bring the pandemic to an end, the Government has provided extra funding for research on COVID-19. This is, of course, very good and entirely necessary, but research in other medical fields is also needed to improve human health. Researchers in many of our fields have made great sacrifices over the past year when they have shifted their research focus to helping in the fight against the coronavirus.

The fact that we had effective vaccines less than a year after the pandemic broke out is due to decades of basic research on viruses and vaccines. Medical research must be given scope for long-term work under predictable, sustainable conditions. We do not know what form the next major health crisis will take, but it may come suddenly. For the world to be able to tackle it we now, already, need more proactive initiatives in free research.

The Akademiliv newsletter has paused for summer. In the autumn, you will receive the first regular newsletter on August 24th.

Collected links regarding the war in Ukraine

APPOINTMENTS. Professor Jens Nielsen and Michael Treschow, a prominent businessman, have been appointed as honorary doctors at Sahlgrenska … END_OF_DOCUMENT_TOKEN_TO_BE_REPLACED

CHRONICLE. In her last letter to staff and students this semester, Agneta Holmäng focuses especially on two matters that caused a big flurry of … END_OF_DOCUMENT_TOKEN_TO_BE_REPLACED

PROFILE AREAS. Which areas should be designated as special research areas at the University of Gothenburg? This issue will be investigated in the … END_OF_DOCUMENT_TOKEN_TO_BE_REPLACED

The construction project invites staff and students at the Faculty of Science and Sahlgrenska Academy on September 30 in the afternoon. With less … END_OF_DOCUMENT_TOKEN_TO_BE_REPLACED

CONDITIONS OF RESEARCH. Outside the Swedish NMR Centre, at the Hasselblad laboratory on Medicinareberget, a large magnet has recently been set … END_OF_DOCUMENT_TOKEN_TO_BE_REPLACED

VICE-CHANCELLOR ELECTION. Sahlgrenska Academy will appoint 13 members to the consultative assembly, which is preparing the appointment of a … END_OF_DOCUMENT_TOKEN_TO_BE_REPLACED

RESEARCH COOPERATION. In the future, it is hoped that stem cells can be used to treat osteoarthritis, the world’s most common joint disease. R … END_OF_DOCUMENT_TOKEN_TO_BE_REPLACED

INTERACTION. Life science and collaboration among the medical system, academia, and the private sector was the main theme when Vinnova, Sweden’s i … END_OF_DOCUMENT_TOKEN_TO_BE_REPLACED