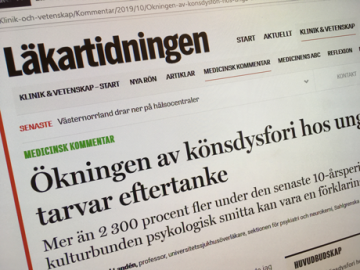 DISTINCTION. Mikael Landén, professor of psychiatry at the University of Gothenburg, is the winner of the 2019 Article of the Year award given by Läkartidningen. He won in one of the six categories (commentary) for an article about the influx of young patients with gender dysphoria.

Under the title “The increase in gender dysphoria among young people requires consideration”, he describes the situation facing the health care system and the state of research. Reactions were immediate in the comments to the article: “Wonderful!”, “Excellent!”, “Long needed!”, “Thank you!”.

“My point was that we do not know what is behind this dramatic increase of young people looking for help for gender dysphoria. The explanation that it is related to changes in Swedish legislation does not hold up since the increase can be seen internationally. There is also no support for reduced stigmatization over the years that the increase has occurred. I believe it is something else. I don’t know what, but it has to be taken seriously and studied.”

Mikael Landén was part of a group that in the autumn conducted a systematic review of the research for the Swedish Agency for Health Technology Assessment and Assessment of Social Services (SBU) on the state of current research. SBU was tasked by the government to examine the issue, and the report was presented in December.

“The study was a quick job. We lacked time to grade the evidence, but the report still clearly showed that there is not enough research in the field. On the other hand, the phenomenon with increasing numbers of young patients is new, so there has almost not been enough time to do any research.”

According to Landén, over ten years, the situation has gone from a handful of patients with gender dysphoria per year to hundreds. And the trend is for the increase to continue.

Fevered pitch to the debate

“In such a situation, the medical system needs to take a step back and ask if this larger group of patients are helped by the same treatment as was previously reserved for a very small and carefully chosen group. Perhaps so, I don’t know, but it must be studied.”

Is this a mine field?

“Yes, there is a fevered pitch to the debate in any case, says Landén. Some people have this image of crazy doctors and psychologists doing strange experiments on our children but that isn’t the case. The health care system continues primarily treating patients in the same way as before. But with the rise of new groups looking for treatment, there isn’t evidence for which measures help and which measures may do more harm than good.

Läkartidningen: Winner of the Article of the Year announced: http://lakartidningen.se/Aktuellt/Nyheter/2020/01/Vinnarna-i-Arets-artikel-utsedda-/

THESIS. A study that was part of a recent doctoral thesis at the Institute of Clinical Sciences reports a significantly higher risk of developing … END_OF_DOCUMENT_TOKEN_TO_BE_REPLACED

ACADEMIC CEREMONIES. On Wednesday, January 25, the University invited a 68 staff members to a ceremony to receive their Zealous and Devoted … END_OF_DOCUMENT_TOKEN_TO_BE_REPLACED

HONORARY DOCTOR. All staff at Sahlgrenska Academy may nominate honorary doctorates. The appointments are evidence of the faculty’s appreciation, a … END_OF_DOCUMENT_TOKEN_TO_BE_REPLACED

NEW STUDY. Mustard gas harms the vision, skin and breathing. Three decades on, however, the predominant effect is mental ill-health. At a time … END_OF_DOCUMENT_TOKEN_TO_BE_REPLACED

CLINICAL STUDY. A large clinical study is now beginning on an approved drug for treating psoriasis. The drug will be tested on patients who were … END_OF_DOCUMENT_TOKEN_TO_BE_REPLACED

COLUMN. For the first time, the work environment survey (ARK) at the University of Gothenburg (GU) now contains a sub-survey aimed specifically … END_OF_DOCUMENT_TOKEN_TO_BE_REPLACED

AWARD. Do you know of a really good thesis that was defended last year? Until February 7, you can nominate for the Sahlgrenska Academy's PhD … END_OF_DOCUMENT_TOKEN_TO_BE_REPLACED

RESEARCH RESOURCES. New EU legislation for clinical trials of medicinal products will be phased in over the coming years. All new applications … END_OF_DOCUMENT_TOKEN_TO_BE_REPLACED

RESEARCH CONDITIONS. "Breathe Sweden", a digital platform for researchers who collect studies on diseases and disorders of the respiratory tract, … END_OF_DOCUMENT_TOKEN_TO_BE_REPLACED

DOCTORAL THESIS. It has been shown that the percentage of ankle fractures that undergo surgery could be substantially reduced, from more than 30 … END_OF_DOCUMENT_TOKEN_TO_BE_REPLACED