PEOPLE. Lecturer and program coordinator for the Dietetics program, member of Sahlgrenska Academy’s environmental council and a health and safety representative. Henriette Philipson’s list of qualifications is long and all her commitments are colored by two interests: the environment and food. With a pinch of daring. After 25 years at the University of Gothenburg, she is now retiring.

No, Henriette Philipson never planned to be a dietitian. When she studied human nutrition both in Gothenburg and Oslo, she was focused on working as a volunteer in Africa.

“I travelled to Niger but it wasn’t what I was hoping for. They had had a draught for many years and that’s why I wanted to help with their food supply but then huge storms occurred and making porridge for people was not what was most pressing for them. I went home and someone suggested that I could work as a dietician before heading abroad again. So I applied for a job in Boden where I worked for six months as a dietician and I really enjoyed it.”

She continued working as a dietitian at Wasa Hospital, and then Sahlgrenska and at children’s hospitals before becoming a head dietitian. Together with her colleagues at the then Nordic Council, she put together the master’s courses that then became the fourth year of the Dietetics program, leading her to becoming program coordinator and an instructor on the program in 2004. Each course on the program has a team associated with it. This means that the examiner does not necessarily need to be the course director and allows for a more robust structure.

“It is important to work in teams if you want to produce something for others, such as an education. There are many approaches and you need multiple people providing input on what is to be produced. I am good at thinking outside of the box and identifying things that are not working and trying to improve them, while others excel in other areas.”

Finding solutions is a central theme in Henriette’s career. From having developed academic programs from scratch to her varied interests in food and the environment. When the Dietetics program moved into its building at Medicinarberget, there was no real kitchen for students and Henriette started thinking about how that could be addressed. There were two really nice labs in the basement for the Pharmacy program students but that were mostly empty. 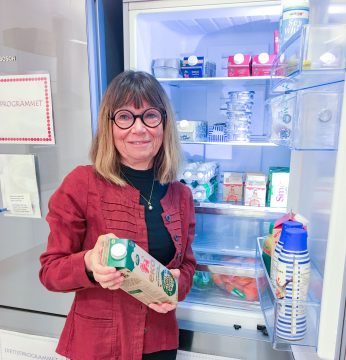 “We all argued that we needed a kitchen but we were told it was really important to have those labs. I did my homework and demonstrated for management how much we would use the rooms and how little they were being used. That’s when Sahlgrenska Academy converted the labs into kitchens for us. Today we have two very nice dietitian labs adapted for disabled persons with cabinets and tables that can be raised and lowered.”

To show how nice the kitchens were and how they worked in them, students baked mini semlas and invited guests. This fits nicely with the non in-class learning that is based on collaboration and gaining insight into how other departments function and work. Another tradition in the same spirit is the Lucia celebration. First-year students arrange a Lucia procession while third-year students bake saffron buns and treat visitors to coffee.

“The international students are invited to experience a Swedish tradition and the main office and other departments get to learn about how we work. This is a type of team building on a bit higher level and gives us a chance to see each other. That’s the goal with both the Lucia celebration and the interprofessional learning,” says Henriette.

Läkemedels- och nutritionscentrum (LNC), the building where dietitians study, was completed in 2008 and has an impressive indoor courtyard that stretches from the bottom floor to the top of the building. Henriette Philipson agrees that it is impressive but maybe not very practical.

“It is difficult to keep the building warm with such a large open courtyard in the middle so I often hear that it is cold in the rooms.

As safety and health officer, she is the contact person for these kinds of questions but she also deals with other issues, like cordiality between colleagues, who is responsible for the cabinets in the hallways or recycling of waste at the faculty. The current issues right now are the ongoing and upcoming construction, something that raises many safety issues.

“Today we have to deal with a new reality: all of these dreadful school shootings around the world. We also have to be aware that it could happen to us and so we have to evaluate safety in a different way. For example, not all doors have locks, which is needed if someone enters the building and starts shooting. If that were to happen, we have to be able to lock the doors to keep the attacker out.”

This is an ongoing discussion that will take time to address since it is a completely new situation that we haven’t had to deal with in the past in Sweden. But Henriette feels strongly that it must be included in the planning.

Working for change is important for dietitians since they want to change people’s behavior in terms of diet and exercise, and now this also includes aspects like the environment and sustainability. Henriette has worked for many years to incorporate these ideas into the program and now they are finally there. Early in the program, students are given the assignment to conduct a personal sustainability project that they then evaluate. 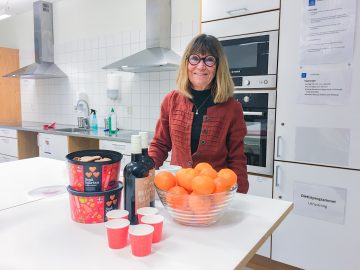 “This could be to stop drinking coffee and calculate how much water is saved or biking instead of driving to school. Some projects are viable while others are not possible to complete but the students have at least tried,” says Henriette.

Just over a year ago, she started a project together with the kitchen manager at the restaurant Lyktan. Instead of throwing away leftovers, Henriette wants the staff to be able to buy the food to take home.

“The leftover food is both tasty and nutritious. It has been prepared from scratch using ingredients that are locally produced, organic and seasonal. It’s great food, even the day after it has been prepared. Swedes throw away on average 28 kilogram of food per person per year. Few people realize how many kilos are involved and what this means for the environment.”

But making this happen is not easy, and it took about a year to go from idea to implementation. It required equipment to prepack the food, ingredient labels on the take home boxes, and a functioning payment system for them.

“In the past, we used food in another way but now we are too focused on the ‘best by’ date on food. There are some food items that almost never get too old but yet still have a ‘best by’ date, like salt.”

Today, the system with food boxes is in operation, and it is a much appreciated success among employees. Henriette emphasizes that if you want something done, you have to dare to ask, think about what is possible and, as she puts it, think outside the box.

“I don’t think anything is impossible. While sometimes it might not be possible one way, you can always think about it in a different way. There are always solutions. Of course, I’ve failed at times, but at least I have tried. I feel like those people who never make mistakes aren’t really trying. Not making mistakes means not developing as a person and I’m not interested in that.”

RESEARCH COMMUNICATIONS. Can you print cartilage cells so that they form a piece that can be used to rebuild an ear, for example? Yes, it looks … END_OF_DOCUMENT_TOKEN_TO_BE_REPLACED

STUDY. Surgical treatment of obesity is as effective for individuals who developed the disorder early, by the age of 20, as for those who have … END_OF_DOCUMENT_TOKEN_TO_BE_REPLACED

MEDICINAREBERGET. Natrium, the new building for the Faculty of Science at Medicinareberget, is expected to be ready for occupancy in 2023. The … END_OF_DOCUMENT_TOKEN_TO_BE_REPLACED

REPORT. An overview report on alcohol, pregnancy and infants’ health that focuses on fathers’, as well as mothers’, drinking habits is now attra … END_OF_DOCUMENT_TOKEN_TO_BE_REPLACED

RESEARCH. The Swedish team responsible for uterine transplantation research has, for the first time, transplanted a uterus from a deceased donor. … END_OF_DOCUMENT_TOKEN_TO_BE_REPLACED

BUILDING INFORMATION. Akademiliv provides an overview of the construction project for new premises for the faculty of science and reconstruction … END_OF_DOCUMENT_TOKEN_TO_BE_REPLACED

CAMPUS DEVELOPMENT. A blast signalled the start of the new building for the Natural Sciences Faculty at Medicinareberget. The name of the … END_OF_DOCUMENT_TOKEN_TO_BE_REPLACED

STUDY. Adding sewage sludge on soils does not promote antibiotic resistance, a study from University of Gothenburg shows. Some of the … END_OF_DOCUMENT_TOKEN_TO_BE_REPLACED

NOMINATE. Do you know of teachers who have developed and implemented a successful and innovative educational idea in teaching? Or one or more … END_OF_DOCUMENT_TOKEN_TO_BE_REPLACED

Is it possible to investigate menopausal age, or not? In more than one in three women aged 50, the body provides no clear answer about the … END_OF_DOCUMENT_TOKEN_TO_BE_REPLACED