BOOK RELEASE. Anja Smits, professor of neurology at the University of Gothenburg, has debuted as a fiction writer. Though both science and the hospital environment are important parts of the story, the book is not about her.

It is called Den tysta korridoren (“The Silent Corridor”) and was published by Ekström & Garay on April 28. If you are employed by Sahlgrenska Academy or affiliated with it, you can win a signed copy (the book is written in Swedish). Email your name and address to akademiliv@gu.se by Monday, May 16, to be entered in the drawing. 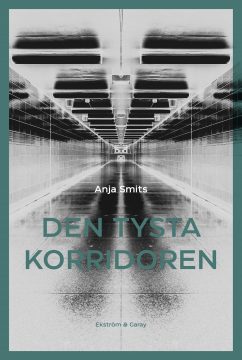 The novel follows two main characters, one an experienced scientist and the other a cancer researcher. Physicist David Tellman suffers an epileptic seizure in the middle of a packed lecture and is soon diagnosed with a brain tumor. Oncologist Mette Øst, a new arrival from Denmark, becomes his attending physician.

“When we suffer a serious illness, the people closest to us become very important, and it is almost impossible to cope with it alone. You can no longer live the way you used to, but if you can lower your aspirations, you can still a dignified and eventful life,” says Anja Smits.

Like the book’s main character Mette, Smits is an expert in brain tumors, and like the character in the book, she has experienced coming to Sweden as a doctor from another European county–in her case, the Netherlands. But although the author has much in common with the main character, the book is not autobiographical.

“I consciously chose to let Mette become an oncologist and not a neurologist like me. She is another fictional character that I made up,” says Smits.

The character Mette Øst fights to stand up to the Swedish healthcare hierarchies, where the culture of domination and silence is deeply rooted in the fictional hospital where she works.

As a professor and chief physician, Anja Smits is very accustomed to writing, but normally for scholarly works and clinical descriptions. Perhaps that explains why the language in her novel is also scaled back and restrained. She considered it most important to produce the story and the characters’ thoughts, but in the editing phase of the manuscript, she went back into the text to present a more detailed description of the setting as she felt was needed.

Smits moved from Uppsala University to the University of Gothenburg five years ago. Part of her work is teaching neurology in several of Sahlgrenska Academy’s programs. She also takes part in a large group that includes both neurosurgeons and oncologists who study different forms of brain tumors. One focal point for the group is low-grade malignant glioma, a slow-growing brain tumor that develops into a more aggressive disease over 5 to 10 years, sometimes even longer.

“We try to understand why some patients fare better, and why the disease progresses much faster in others. The research suggests that younger patients generally have a better prognosis and that there are sub-types with a different molecular tumor profile,” says Smits, who has translational research collaborations with the Rudbeck Laboratory at Uppsala University and Helena Carén at the Institute of Biomedicine.

Now that the book has been published, she is happy to let the story speak for itself. She has not felt inhibited or concerned herself about whether others like the book.

“Writing gave me the opportunity to reflect a lot on issues that concern and interest me, such as the pursuit of science and the ability of humans to deal with difficult situations. Of course, it would be nice if the reader recognizes these situations, but I could not have written the book any other way.”

Collected links regarding the war in Ukraine

INTERACTION. Together with several colleagues, Marcus Lind is working to be granted a patent for an idea that could lead to a new way to treat … END_OF_DOCUMENT_TOKEN_TO_BE_REPLACED

RESEARCH CONDITIONS. A new version of djurforsok.info was recently launched. The site is a collaboration between the Swedish Research Council and … END_OF_DOCUMENT_TOKEN_TO_BE_REPLACED

INTERACTION. As part of the Science Festival, a Three-Minute Thesis (3MT) winner was selected on Friday afternoon. In this competition, doctoral … END_OF_DOCUMENT_TOKEN_TO_BE_REPLACED

ACADEMIC CEREMONY. At the celebration lecture before his conferment of an honorary doctorate, Bo Håkansson described his 45-year journey in the … END_OF_DOCUMENT_TOKEN_TO_BE_REPLACED

STUDENTS. For the first time, the master’s thesis project fair for health and technology students was held on site at Medicinareberget. A concept … END_OF_DOCUMENT_TOKEN_TO_BE_REPLACED

INTER-ACTION. The Centre for Person-centred Care GPCC is now starting up new research projects and new collaborations. The projects will … END_OF_DOCUMENT_TOKEN_TO_BE_REPLACED

INTERACTION. Yet another important step for the development of Life Science in the Gothenburg region was taken recently, when leading … END_OF_DOCUMENT_TOKEN_TO_BE_REPLACED

PRIZE. The Assar Gabrielsson Foundation has named Angela Molinaro as a prize-winner in the basic scientific research category and Emilia Alfonzo … END_OF_DOCUMENT_TOKEN_TO_BE_REPLACED

ACADEMIC ELECTION. In May and early June, the recruitment committee will prepare and send out for comment a proposed requirement profile for the … END_OF_DOCUMENT_TOKEN_TO_BE_REPLACED