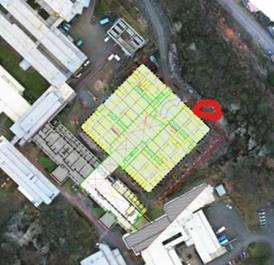 On Tuesday April 23, four rubber mats caught fire after the blasting. The dynamite used at the specific location, on the opposite side from the façade of Medicinarelängan, (illustration below) is known to mean a higher risk to cause overheating and therefore preventive safety measures such as watering had been done prior to the blasting. The fire was quickly stopped by moving the burning rubber mats away from the others and then covered with rocks and stones. The fire brigade was called in for the final fire extinction, according to safety procedures.

The surrounding fence will be completed with a gate close to the façade of Nya Forsken. The gate is there to secure the evacuation route and will be open from the inside at all times, however locked from the outside.

In this week and the following weeks there will be investigations regarding water in the cracks on the hill. The measuring is done to prevent unnecessary maintenance in the future, as water might cause damage to the rocks as it freezes.

Both two blasts this week will be on level one.

In the coming weeks blasting will alternate on level one and two.

In parallel with the blasting, the long digger will be busy with the road construction outside Nya Forsken. There will be outloading of soil nearby because of that.

Further reinforcement of the protection for Nya Forsken will be put up inside the existing fence. Logs will be stacked on top of each other. The evacuation route along the façade will not be affected.

CONSTRUCTION INFORMATION WEEK 19
May 6 – May 10

Blasting will continue according to the week 18 schedule.

Protection barriers and safety net will be completed.

In the coming week Skanska will be arranging the annual ”Safety week”. The construction site will host visitors for the event and Skanska will also arrange workshops for the whole crew on safety subject.

CONSTRUCTION INFORMATION. Akademiliv provides an overview of the construction project Natrium, the new premises for the Faculty of science, and … END_OF_DOCUMENT_TOKEN_TO_BE_REPLACED

SAVE THE DATE. Mark Thursday, February 4, 2021 for Research Day in your calendar. The theme this year is "The new normal? Consequences, lessons … END_OF_DOCUMENT_TOKEN_TO_BE_REPLACED

STUDENTS. This year 64 students will have summer jobs as researchers at Sahlgrenska Academy, thanks to scholarships from several different … END_OF_DOCUMENT_TOKEN_TO_BE_REPLACED

PROGRAMS. Sahlgrenska Academy has applied for degree-awarding powers from the Swedish Higher Education Authority (UKÄ) for a completely new … END_OF_DOCUMENT_TOKEN_TO_BE_REPLACED

Note that all documents are only available in Swedish. REFERRAL. Gothenburg University is one of many referral bodies for the upcoming Swedish … END_OF_DOCUMENT_TOKEN_TO_BE_REPLACED

SUSTAINABLE DEVELOPMENT. Act sustainable 2020 will be a weeklong digital event. The ordinary physical events around the campuses on Chalmers and … END_OF_DOCUMENT_TOKEN_TO_BE_REPLACED

INFRASTRUCTURE. Three of Core Facilities’ centers have changed premises. Proteomics and MPE have relocated to the new pavilions behind Lundberg L … END_OF_DOCUMENT_TOKEN_TO_BE_REPLACED