GENERAL ACADEMY MEETING. “Among clinicians the understanding of the regulations is limited.” The statement is made by Kjell Asplund, chairman of the National Council on Medical Ethics (Smer), regarding the border between clinical research and healthcare.

On April 3, he filled the Sahlgrens auditorium at the second General Academy Meeting focusing on ‘Ethics in the Academy’. He talked about lessons made from the Macchiarini case – in which he investigated the actions by Karolinska Hospital – and was concerned about positions taken by people in the case; First pro Macchiarini, then against, followed by the unanimous praise of the investigation he made.
“There was only one opinion on the report, and that was that it was good. One might think that it is a paradox in the academic environment that group thinking is so dominant”, he said during his speech.

The lecture (in Swedish) was filmed and is now available for those who were not able to be in place in Sahlgrens auditorium at SU.

Kjell Asplund is chairman of the National Council on Medical Ethics (Smer) since 2012. He is Professor Emeritus of Medicine at Umeå University, and has previously served as Director General of the National Board of Health and Welfare. 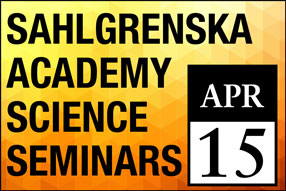 No newsletter during the Easter break

On Wednesday, April 7, the newsletter from Akademiliv will not be distributed as usual, due to the schools having Easter break. However, Akademiliv’s website is updated during the week. Happy Easter!

NEW STUDY. Heart failure and stroke are unusual diagnoses among younger people. But they are now clearly on the rise in men below the age of 40, … END_OF_DOCUMENT_TOKEN_TO_BE_REPLACED

NEW STUDY. Sweden’s acclaimed research on uterine transplants has taken a new step forward: into the field of health economics. Now, for the f … END_OF_DOCUMENT_TOKEN_TO_BE_REPLACED

PEOPLE. Several new variants of the coronavirus are attracting attention, and many people now wonder how long the available vaccines will provide … END_OF_DOCUMENT_TOKEN_TO_BE_REPLACED

NEW STUDY. Infants born by cesarean section have a relatively meager array of bacteria in the gut. But by the age of three to five years they are … END_OF_DOCUMENT_TOKEN_TO_BE_REPLACED

RESEARCH CONDITIONS. During the ongoing COVID-19 pandemic, understanding the virus’ proteins has been at the core of SARS-CoV-2 research, because … END_OF_DOCUMENT_TOKEN_TO_BE_REPLACED

COMBATING COVID-19. The Knut and Alice Wallenberg Foundation is investing SEK 53 million on a national research program to study the effects of … END_OF_DOCUMENT_TOKEN_TO_BE_REPLACED

AI NEWS. In the future, perhaps complications following subarachnoid hemorrhage can be reduced or the threat of an ensuing stroke can be avoided. … END_OF_DOCUMENT_TOKEN_TO_BE_REPLACED

NEW STUDY. Colorectal cancer risk does not rise after bariatric surgery, a study from the University of Gothenburg shows. This finding is imp … END_OF_DOCUMENT_TOKEN_TO_BE_REPLACED

DOCTORAL THESIS. People who are physically active on a regular basis recover better after surgery for colorectal cancer. However, starting to … END_OF_DOCUMENT_TOKEN_TO_BE_REPLACED